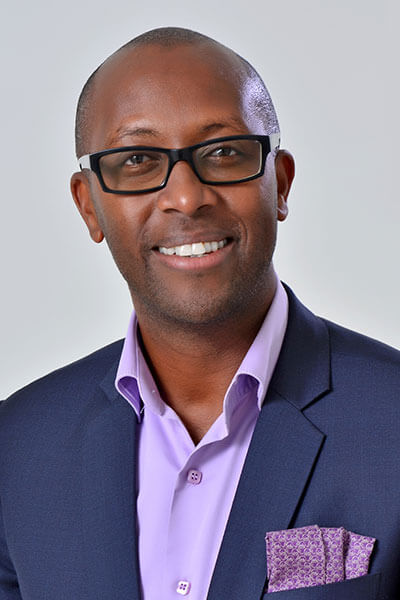 Since 2015, Dr. Gitahi has been the Global CEO of Amref Health Africa (Amref). But long before Dr. Gitahi led the largest Africa-based healthcare nonprofit, he grew up on his mother’s coffee farm in Nyeri, a central province in Kenya. At 10 years old, when not in school, you could find Githinji working side by side with his mother on their one acre farm, where they earned about $100-$200 per year.

“Occasionally when our yield was low, we would go to other farms and pick their coffee for them for very little money. Sometimes we would pick and carry up to 520 kilos to the factory for another family. Most families like ours had their own children picking at their farms on Saturdays, but wealthier families often needed extra labor, so it was common to work on their farms after picking at your own farm for extra coin.”

Until his appointment at Amref, Dr. Gitahi was the Vice President and Regional Director for Africa of Smile Train International, where he successfully established partnerships for long-term sustainability with various African governments. Dr. Gitahi began working as a Medical Doctor and moved slowly into management within the hospital environment where he discovered his passion for marketing.

This led him to senior positions at GlaxoSmithKline and Madison Insurance, where he established their medical division to create health insurance packages. He later joined the Nation Media Group, where he was the Managing Director for Monitor Publications in Uganda as well as General Manager for Marketing and Circulation in East Africa. He also held progressively senior positions at Avenue Group and within the insurance industry. Dr. Gitahi has a Masters in Business Administration, majoring in Marketing. As a Medical Doctor, Dr. Gitahi practiced Gynecology, Pediatrics and Internal Medicine.

At Amref, Dr. Gitahi has led the organization through a lenses of “One Amref” to raise revenues from $80 million to $120 million, opened opportunities for social enterprise that resulted in net profits of $2 million, and up-held our reputation of that of a world-class organization.

Dr. Gitahi is also the Steering Committee Co-Chair of UHC2030—a World Bank and World Health Organization global initiative for universal health coverage. Dr. Gitahi is interested in the key drivers of lasting health change and believes in the focus on universal health coverage (UHC) as the roadmap to achieving good health for all people. He says: “UHC is key. It reflects the challenges we face in affordability, accountability, accessibility and integration of services, leadership, governance and management.” UHC2030 will convene over 150 delegates from 23 countries, international agencies, and academia to coincide with the United Nations General Assembly this fall. In addition, he was recently appointed as a member of the governing Board of the Africa Centre’s for Disease Control and Prevention (Africa CDC).

Dr. Gitahi’s undying passion, coupled with his authenticity and charisma, means he is in high-demand for leadership roles and speaking engagements across the world.

Want to Join Us?