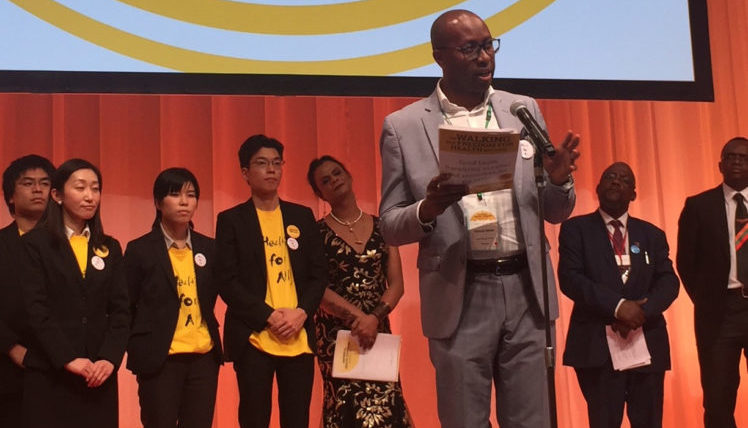 Dr. Gitahi is expected to help steer the global movement towards its goal of achieving universal health coverage in UN member states by 2030

December 18, 2017 –  Amref Health Africa Group CEO, Dr Githinji Gitahi, has been appointed co-chair of the UHC2030 Steering Committee, a responsibility he will undertake even as he continues to head Amref Health Africa’s day-to-day operations. UHC2030 is a World Bank and World Health Organization (WHO) forum for achievement of universal health coverage (UHC) by 2030 and has membership across countries, private sector and civil society organizations.

The forum, which is held annually, is part of the UHC2030’s strategy to build global consensus on key steps that countries around the world need to take to achieve universal health coverage by 2030.

The UHC2030 core team said that out of the many applications they received from well-qualified candidates, Dr. Gitahi stood out because of his expertise, passion and experience.

Dr. Gitahi has an established track record advocating for UHC, particularly in Africa where he leads Amref Health Africa, the largest African-led health development organization on the continent. He has successfully built strong cross-continental coalitions to advance the UHC agenda globally.

“I am humbled by this new appointment. It is a huge opportunity to highlight the link between health and justice. Good health is not a privilege, but a right that needs to be promoted and defended. This requires the wholehearted participation of communities, government, private sector and civil society organizations.  As co-chair, my commitment is to support a community driven universal health coverage system which is a right,” said Dr. Gitahi.

At Amref Health Africa, Dr. Gitahi leads a network of 18 offices (seven in Africa, 11 in Europe and North America) with a current global budget of US$110 million and more than 1,000 staff. In his tenure as Group CEO, he has been emphatic on the connection between health and justice.

UHC2030 is the post-2015 umbrella forum which succeeds International Health Partnerships (IHP) formed in 2007 and which was a donor and recipient country platform for aid effectiveness in the health sector. The UHC2030 was formed in recognition of the fact that UHC is primarily a country responsibility through domestic resources and with donor support.